After enjoying the antics of the crane family daily it was disappointing that they headed away from the lake every morning, and didn’t return until 4:30 or so in the afternoon.  Because of my inexperience at photography I didn’t know how to overcome the harsh light of the setting sun, so I was taking the same browned out photos every day.  My curiosity eventually got the best of me and I decided to find out where they spent their days.

Actually I didn’t exactly decide to do it ahead of time, I just jumped in the car one morning and drove around the block, setting up my camera and tripod on the bank of the pond on the next street.  I didn’t have to wait long. 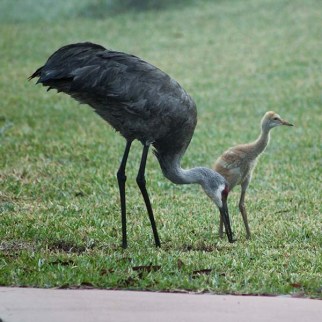 I was happy to see them appear, and they headed to the next pond from mine.  But they didn’t stop, they continued walking and headed into a yard on the far side.  So I drove around the block again and saw them appear, and then cross more yards on a fairly straight path to the next pond.  And that’s where I lost them.  But I frequently waited for them as they started their day, and sometimes when I knew they’d be coming back, and took many, many pictures.  Upon return Dad would fly over to the island  and clear out the interlopers on the nest while Mom and the kids waited, and then they would come over also.  But one evening I was surprised to see both Mom and Dad fly to the nest to clear it off.  I looked for the babies and they were running along the edge of the lake, and then began to swim by themselves over to the island.  Good parents that they are, first Mom and then Dad flew over and escorted them back to the island.  But the very next night the babies were allowed to swim to the island alone, while Mom hovered on the island waiting for them.  They were growing up. 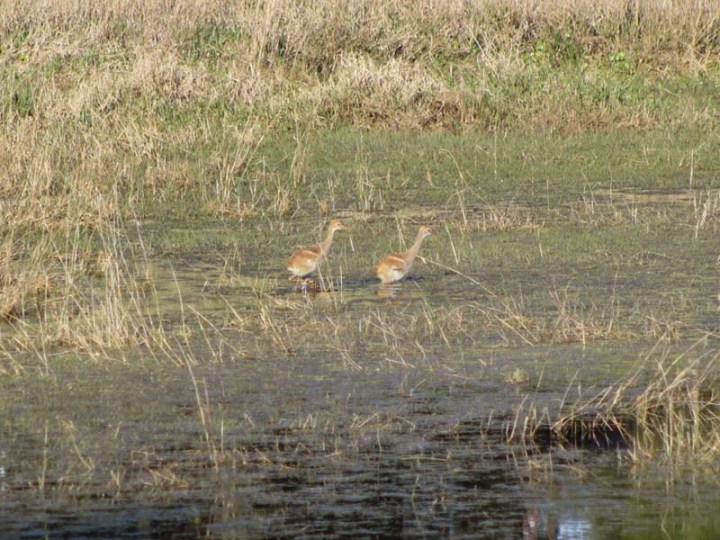 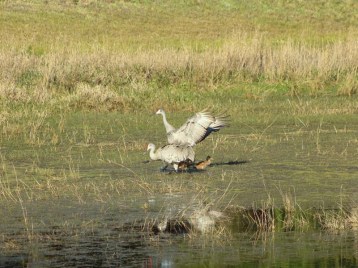 They might be growing, but they still needed their mommy at bedtime.

Watching them was so much fun, but I still worried to think of how many streets they had to cross on their travels.  Turns out crossing the street wasn’t the only danger.  One morning as I waited for them on the next street over a couple came walking by and we chatted.  They said they knew which cranes I was talking about and they were excited to tell me what had happened the week before.  They saw the family as they walked about a block away, and as the cranes were cutting through yards one of the babies somehow got inside the fence of a yard with a pitbull.  They held their breath as the dog approached the baby.  But the owner saw what was happening and called to the dog and she stopped, then the dog owner picked up the baby and put it on the outside of the fence.  But the really surprising part of the story is that the rest of the crane family had just continued on their way without their little one.  So the walkers picked up the baby and ran to catch up with the rest of the family and then released it, and the four of them just kept on their way.  This is not at all what I thought would happen if one of the babies were in danger.  More worrying was in order…