The whole reason I went out for the sunset last night was because the rain had stopped, the cloud cover was breaking up, and I expected a lot of ‘fire in the sky’ out of the sunset.  Not so, and I know why.  It was the wind!  I suppose that Pine Island being a peninsula is why it’s always so windy there, and that’s the blessing that lets you come out for the sunset on the hottest of summer days.  But last night it would drive me off the beach as soon as the above picture was taken.  And I think it blew the clouds away.

But if I was cold, imagine how cold this bikini-clad model was.  They took pictures for quite a while and I never heard her complain.  And I wondered if the wind would interfere with the photos, but maybe not.

And didn’t I just question whether photo shoots and tightrope walkers were just a summer thing?

And it’s tough to have a drum circle with only one drum.  Soon a second one joined them, but as cold as I was I didn’t stick around to see if it turned into a full drum circle.

The thing that has bugged me about trying to photograph the Skimmers is that they usually look as if they don’t have eyes.  At least you can see that there are eyes in this photo.  And I can see their longer lower bill, which they use as the skim across the water with that lower bill in the water and scoop up dinner.  Normally I just see them standing around, but last night I saw one in action, skimming across the water, but much too fast to try to get a picture.  At least these guys are easy to spot.

But the find of the day were the Sanderlings.  If that’s what these pale little birds are that is.  I’ve been on the lookout for them ever since my photographer friends said I had missed them the night before.  They weren’t there last night to tell me if that’s what these cute little birds are, and Merlin says that they may be Sanderlings or Western Sandpipers.  Either way they are new to me.  It must look odd when I concentrate on the shore birds the way that I do.  I have to look long and hard to start to see how different they are from each other.  And I can identify a few of them now, so I’m learning.  It was a fun, even if freezing, night… 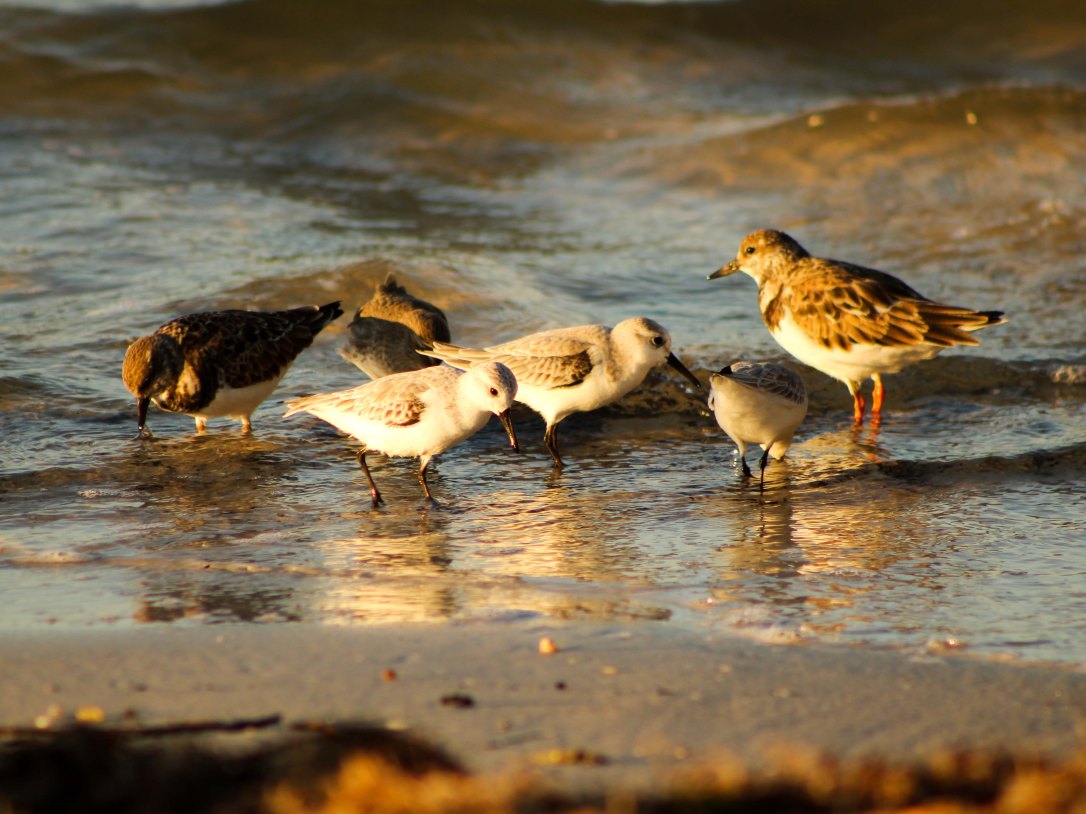