It had to happen, right? I know you saw it coming, it was inevitable.  A 600 mm lens in stock at Best Buy for virtually the same price as Amazon. In stock at their Clearwater store that is. It was a trek, plus they had lots of ‘call outs’, so short staffed and a long wait to get waited on, but I got one. Merry Christmas to me! Of course I zoomed home, stuck it on the camera, and went out back to try it out. And much to my surprise I saw that there were not two Little Blue Herons out there, there was one Little Blue Heron and a Tricolored Heron. I wonder if that’s been the case all along and I just assumed that it was two Little Blue Herons. I downloaded those pictures right away and was so pleased with them that I headed off to Jenkin’s Creek in hopes of spotting an eagle. 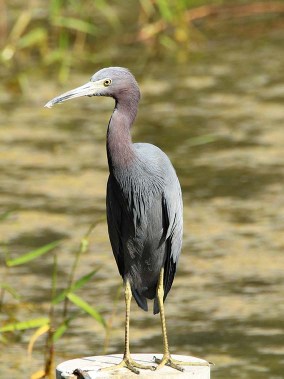 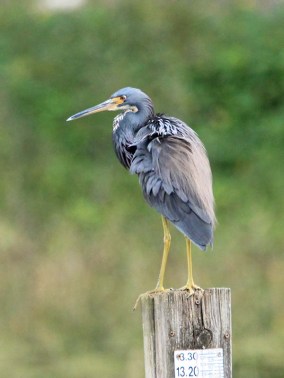 And I thought I did spot an eagle in the Wood Storks tree, after all I could see the white head. But no, it was an Osprey, and he was clutching a fish in his talons. I clicked photos while he feasted.

Then I stopped to take photos of the Wood Storks along side the road,

and overheard a fisherman tell a woman that she should go across the street to Linda Peterson Park to see manatees, so that was my next stop. There I found two young people who kept insisting that there were manatees right there by the bridge we were standing on, but for the life of me all I could see was the reflection of the trees. Then the breeze came up and broke up the reflection, and there they were!  And two nice ladies to chat with as we snapped pictures.

When I look at the photos in the camera I honestly can’t tell how sharp they are, so again, I was really happy when I got to see the results. What a nice day!