The universe is conspiring against me.  I swear it is.  The weather here is raining, and cold enough to make you miserable, but not cold enough to try to recreate the videos I’m seeing on Facebook that show a soap bubble slowly developing ice crystals as it freezes in the icy cold somewhere where I’m glad I’m not.  And on the iPhone photo page I saw lovely macro photos of snowflakes.  If I was somewhere with snow I think I would be outside trying to recreate that photo.  Yesterday I decided to take a couple of pictures when I noticed how pretty the flowers out front were, so I went to my favorite macro app, Camera +, in the iPhone.  I clicked on the little + sign, but it didn’t bring up the macro feature that I’ve used before.  Instead it was a menu I’d never seen before, and being on my way back to work I didn’t get to investigate.  Nothing is ever easy.

None of my devices were working yesterday, and neither was Netflix.  So I decided to restart my modem, which is when I realized that flipping off the one wall switch in the bedroom had shut off the iron, but also shut down the modem.   Operator error this time, I’m lucky I figured it out so quickly.  My fault, and I suppose it’s also my fault that the Roku remote has been missing for such a long time that I forgot why I hadn’t been watching Netflix for so long.  And when I went looking for a new Roku remote online I discovered the Roku Express app, so now my trusty iPhone is my Roku remote!

I’ve been an Apple girl, (Charley just reminded me that I was a girl when Hollywood was a prairie), for a very long time now, and I’m spoiled.  The computer just works, always.  Well, until lately.  Facebook either won’t load at all, or it quits all of a sudden and I lose whatever I had written.  Today when it quit I noticed the message that the page was reloading because it was using ‘significant memory’.  Is the computer dying?  I hope not because I can’t stand to edit my photos on the phone or iPad, even though I bought the iPad for exactly that reason.  So I use the iPad for Facebook, even though I hate typing on it, but I rely on the computer for WordPress.  I’m worried that I need a new computer, but a new bill? Not so much.

And speaking of Charley, he doesn’t always feel as if he is with me, but lately he’s been hanging around, which is why I took him out for a corned beef sandwich at The Lucky Dill the other day.  Which I ate for him of course, but it was a little dry and he would have complained.  (The piece of cheesecake that came with it was very tasty though!)  I brought the other half of the sandwich home and ate it yesterday.  I took the meat out and reheated it in the microwave with a few drops of water, dried out the rye bread in the toaster oven, then reconstructed the sandwich and added a little cheese, and grilled that thing!  OMG, was it ever good.  But now I’m craving all the carbs and ‘bad’ food that I love but haven’t been eating for months now…

And my final proof that the universe has it in for me came in the mail.  When it came is a mystery, it was just sitting on top of the pile of stuff on my table, looking as if it had just been placed there by someone.  But I’m the only one here and I know that I hadn’t seen it before.  Not a Happy New Year moment.  It was the size of a Christmas card, which is what I thought it was, but when I turned it over I found… a jury summons.  I hadn’t missed the date to report though, so that was good, saves me a big hassle I’m sure.  But in reading the info I see that on my next birthday I will have reached the age to be permanently deleted from the pool of potential jurors.  So it’s official, I have it in writing.  I’m past my sell-by date… sigh. 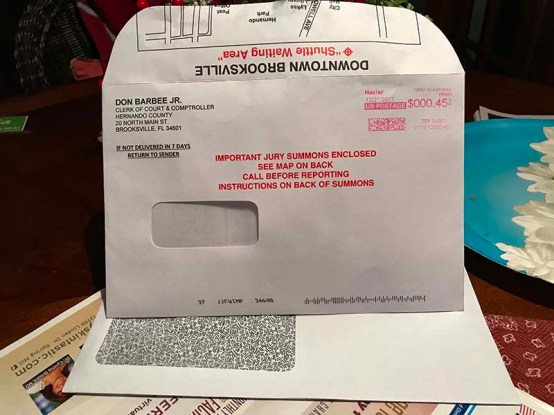