The Anclote Fishing Pier smelled like… fish. I had walked out almost to the end of the pier for a sunset photo op. Evidently the fishermen clean their fish out there.  Phew!  But I’ve gotten ahead of myself…

First was a futile trip to Bayport for the sunrise that didn’t happen. Then off to Jenkin’s Creek where I amused myself taking photos of a Great Egret while I waited for an eagle, and then an otter showed up.  But no eagle so I gave up. But as I pulled out of the parking lot I saw an eagle flying in, so of course I turned around.

I couldn’t resist heading out again later though, blame the fabulous weather. There was the eagle nest that I hadn’t visited since our cold spell, I wondered if all was well, and it was. Except all I got to see at first was the nest itself. Then a head popped up so that I was sure mom or dad were there. And so the wait began.

But then I spotted Dad, or was it Mom, in a nearby tree. My eagle watching friend had said that the parent that is off the nest is always nearby, but I didn’t spot him at first. He was posing nicely. Well, his back was to me, but I think he can swivel his head 360 degrees, which was fortunate from the point of view of photo ops.

I watched for a long time until he flew off to a tree farther away. Then he swooped down out of sight and I was holding my breath hoping that he would come back with dinner for mom. I have to stop trying to anticipate what will happen and just let things unfold. He did return and was on a branch very close to the nest. Then mom joined him on that branch and it made me think of them comparing notes. When Mom flew off to hunt, Dad took over on the nest, which is what I was waiting for, only I had hoped for both parents on the nest together. 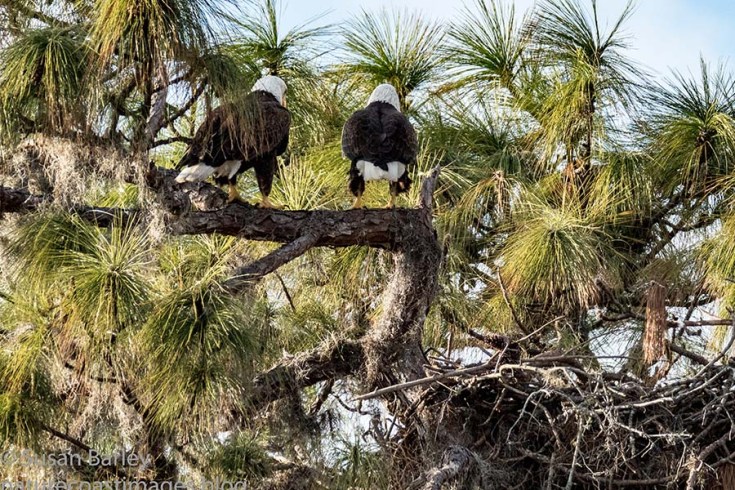 It was time for me to go see what I could see at the fishing pier.  But I already showed you a sunset photo, and the flock of birds flying against the reflected sunset color, but I didn’t show you the pelican.  It was a great sunshiny day!