I spent time at VINS yesterday, the Vermont Institute of Natural Science, back to Quechee again.  According to their literature they are New England’s premier avian wildlife rehabilitation clinic, and they treat 100s of injured birds per year. Some of the injuries can’t be determined, some are from being hit by cars, and some are as simple as being raised by humans, and that is enough for them not to be able to be returned to the wild.  If they don’t fear humans they won’t survive in the wild.  And that’s the goal, of course, but if it is determined that their injuries would prevent the bird from being able to survive in the wild they are cared for within the facility.  They become ‘ambassadors’ for their species and for wildlife in general.

I have been to a raptor rehab in Florida at Indian Rocks Beach.  It’s called The Narrows, and there you will find volunteers circulating among the visitors with various raptors on their gloved wrists.  Quite the up-close experience, and at first I was disappointed that I didn’t see that happening at VINS.  But I got over that once I saw the two-story enclosures, complete with trees, which the birds call home.  I happened to be there at feeding time and thought they would all swoop down to feed, but they seemed to like to think about it a while, move from branch to branch and flap their wings a bit. Forgive me for showing a close-up of the only one who did decide to eat while I was there, our beloved Bald Eagle.  Contrary to what you see here they nest close to water and subsist mainly on fish.  But with exceptions. 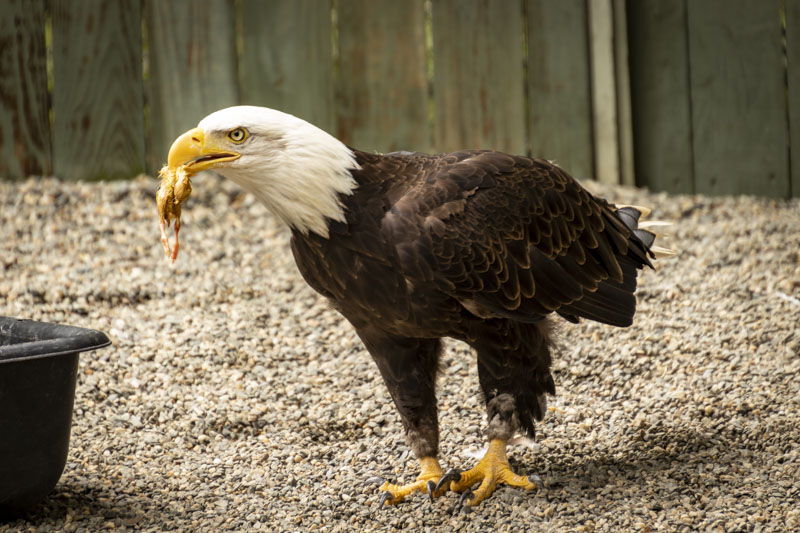 Golden Eagles were next, a species that I only recently became aware of.  They are bigger and stronger than the Bald Eagle, capable of carrying off a small wolf or deer.  That news was a surprise to me. 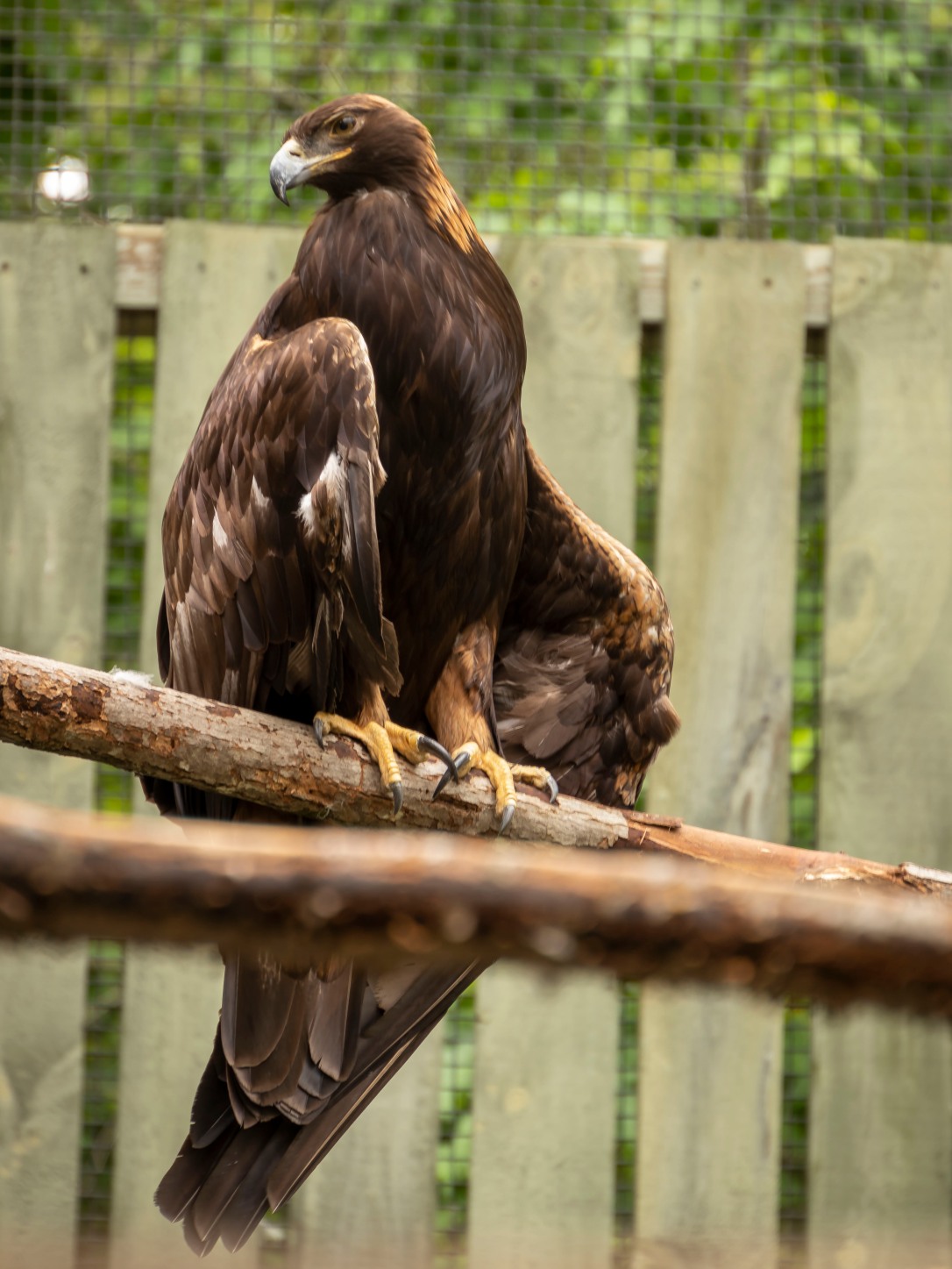 We have the Barred owl, the Great Horned owl, and the Snowy Owl.  At feeding time the attendant didn’t walk into the enclosure with the Great Horned Owl because of where it was perched.  They have been known to swoop down and make a pass at an intruder, and he has been told that it’s like being hit with a 2×4 so he decided to play it safe.  Probably a good move. 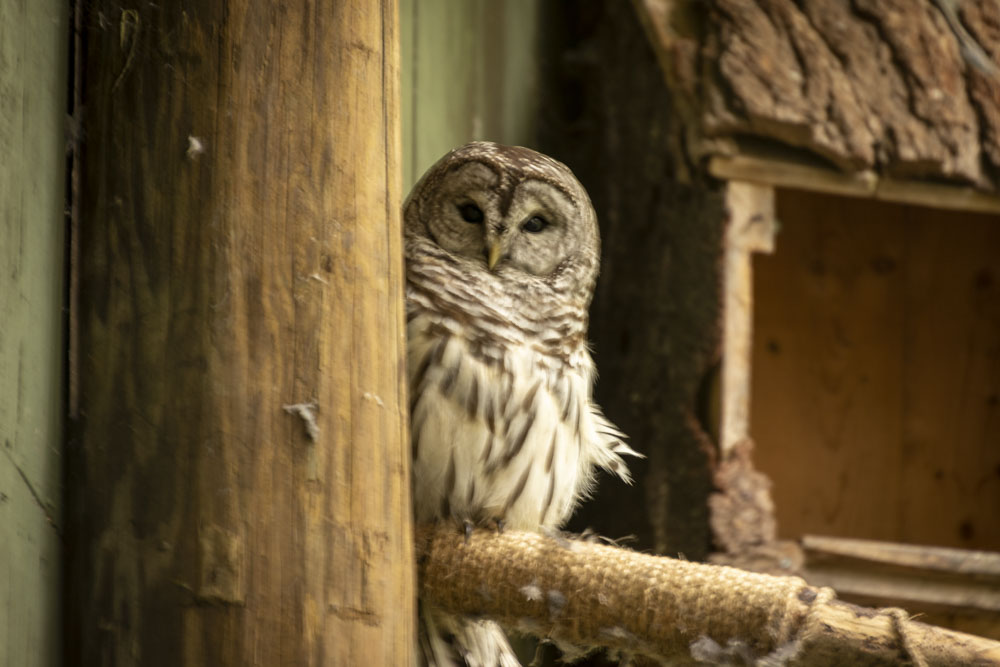 I searched for the snowy owls at Duxbury Beach last winter with no luck.  They were probably there, camouflaged in the snow at the water’s edge.

Kestrals are very small, pretty birds.  But, like all raptors, they are wonderful hunters.

I must apologize for my lack of information on the hawks.  We had red-tailed hawks, Cooper’s hawks, broad winged hawks, and one with a name that started with an F, but I can find no information on that through Google.  Merlin says that all my pictures are one of the above, but it can’t decide which one of the above, it was singularly useless this time.  I should have taken notes, I forget that I can dictate notes into the phone.  Note to self;  the iPhone is not just for photos and directions to photo ops.

And dare I neglect to include the Ravens?  Charley would be very disappointed in me.

In the meadow were lots of flowers, and, my favorite, bees.  Plus sculptures.  I didn’t head to Quechee until the sun finally broke through the afternoon, so consequently I didn’t explore the gorge or the hiking trails at VINS.  I suppose that means I’ll need to return yet again…