The quaintness factor of Nantucket became apparent even as our ship docked at Straight Wharf.  All the buildings have cedar shingles, weathered to a soft gray, and trimmed in historical colors only.  The window boxes are filled to overflowing with flowers in a riot of colors.  Former fishing shacks (each valued at over $1M) greet you as you dock, and on the dock they are  repurposed to be shops, with their colorful wares spilling out the doors.  So colorful that I didn’t realize the sky had clouded over while I was taking pictures.  And lots of places to eat, the smells were heavenly. 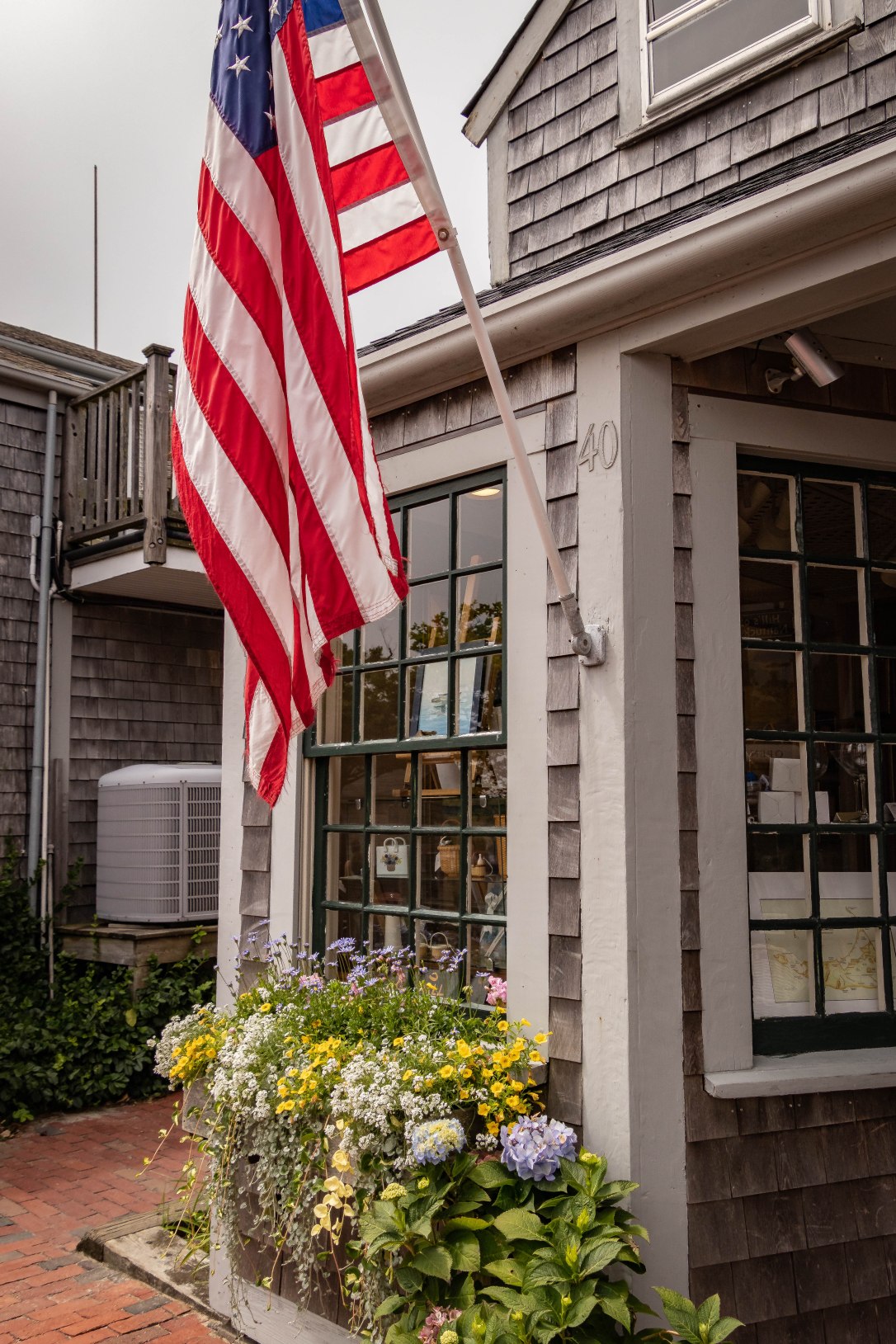 After a mug of delicious chowder I headed out to take the bus tour of the island.  The driver was a wealth of information about the history of the island.  So much so that my mind is boggled to remember it all.  First of all, turn left at this sign to find the tour.  And if you find it then by all means take it. 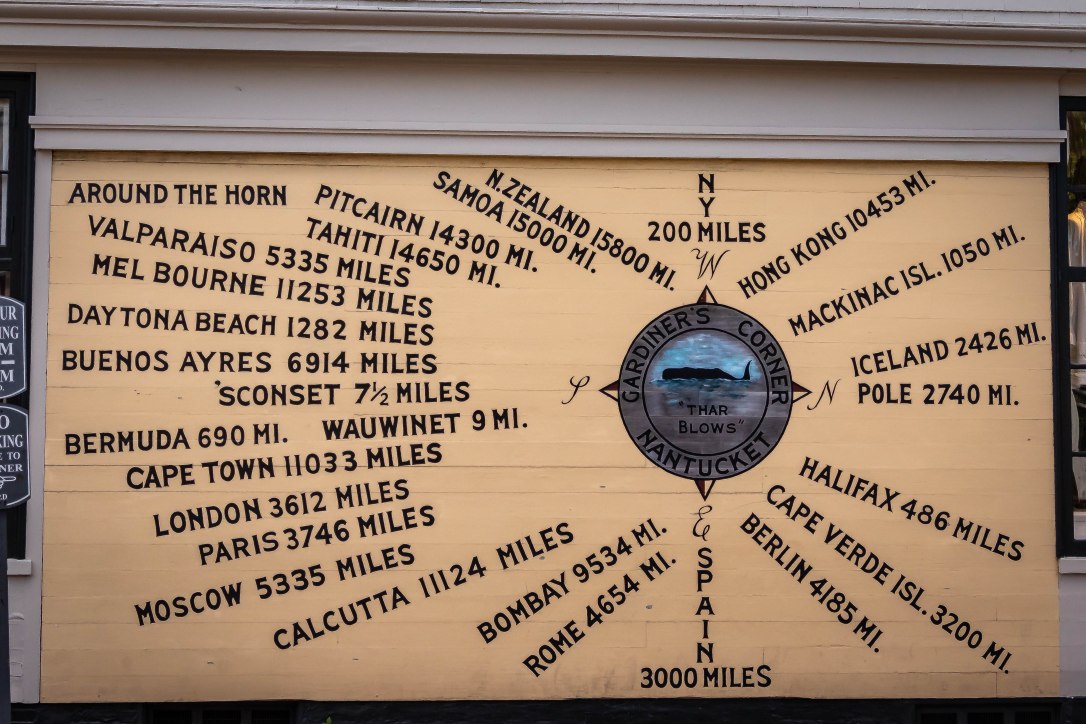 On the tour you will pass a shop with interesting panes in the windows.  The remnants of glass blowing produces these spirals of thick glass which I had never seen before.  I was reduced to shooting pictures through the window of the bus, switching from side to side, and that’s obvious in some of these photos.  I’m glad there were empty seats so I could do that without driving anyone nuts.  The driver pointed out the oldest house in Nantucket, purchased as a wedding gift to Jethro Coffin and his bride in 1686.  And he mentioned that Benjamin Franklin’s mother was born on Nantucket.  The Old Mill is still in operation, so when you pass by it you never know which direction the sails will be facing.  The cap turns so that they can be faced to the wind in order to operate.  They can also be covered in canvas also, to aide in their operation. 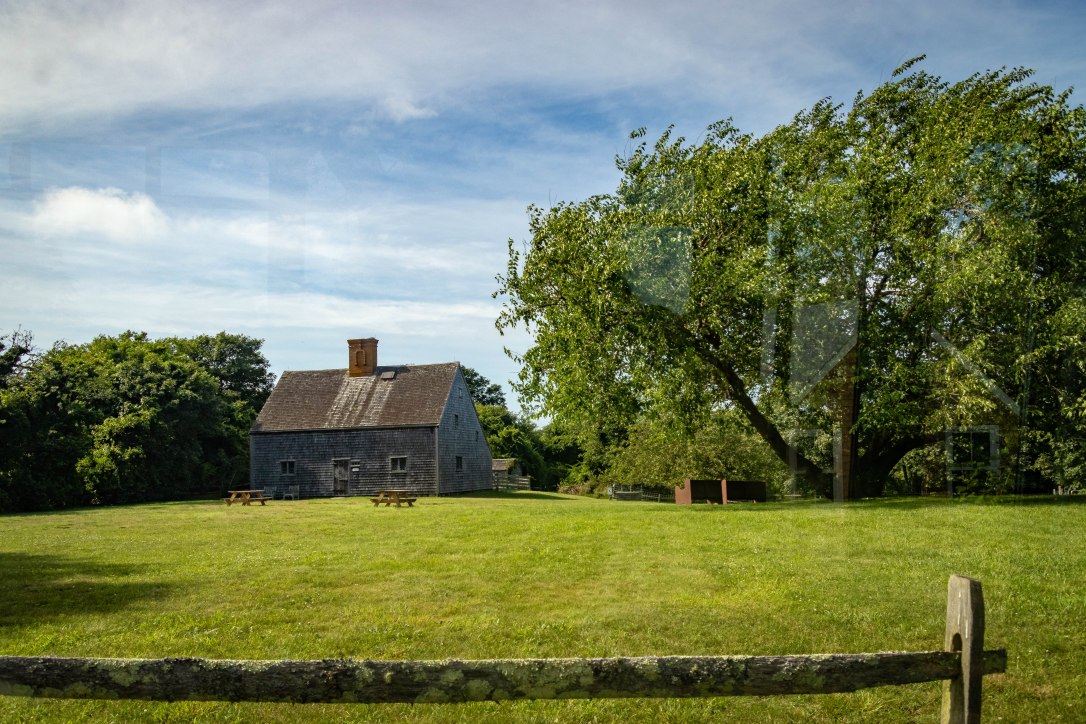 But all of that information was a bonus to me.   The entire reason I wanted to take the bus tour was to see another lighthouse.  There are three on the island, but the last one is only accessible with a 4-wheeled drive vehicle or from the water.  So the Sankaty Head Light was my grand finale of the day.  The driver said that the light blinks faithfully every 7 1/2 seconds, but he admitted that they had turned it off once but he didn’t know that, and he confidently told that tour group to watch for it but it didn’t happen.  He thoughtfully stopped the bus and let me off to get some pictures, but I made sure he wasn’t going to take off again in 7 1/2 seconds.  He promised he wouldn’t.

I confess that I photoshopped a golfer out of this shot.  He was in ALL my lighthouse shots.  Even the distant shot.  Go ahead and check if you like.  The beach erosion on the far side of the island is taking a toll.  Million dollar houses are now perilously close to toppling into the water.  Concerned citizens funded the relocation of the lighthouse 400 feet further from the water, and it was determined that they would have lost the lighthouse if they had waited another year.  There are also many perils for ships off of the coast right there.  The Andrea Doria and the Swedish ship Stockholm crashed 45 miles off the coast.  Fog was the culprit in that wreck.  But many ships met their end there, and the wreckage lies on the bottom along the coast.  Or in the Shipwreck and Whaling Museum.  For 150 years Nantucket was the whaling capital of the world.  Yes, this sleepy little town has seen it’s share of history.

Nantucket was quickly lost in the fog as we pulled out of the harbor heading back to Hyannis.  The fog got heavier and the ship was rocking in the waves.  My last photo op of the day was supposed to be sunset from the water, and that would have been nice, but all in all I’m not complaining…