We always had pets when my kids were growing up.  The most at one time was three cats and two dogs.  (I think my mother thought we were nuts.)  I can’t remember where the parakeet and/or the Siberian hamster fit into the animal timeline.  So it shouldn’t surprise me that my daughter’s household is teeming with pets.

Like Scooter, shown above.  He keeps a low profile and you would hardly know he is there.  But very lovable.  He and Lucy, are a bit of a matched set, wouldn’t you say?  She it a mini-Labradoodle, and very lovable.  She even slept with me last night.  Maybe she was just being a good watchdog and keeping an eye on me.

And then there is Georgie, who, despite the fact that he only has his two lower fangs, and he was de-clawed (except for one claw) when they rescued him, is quite the hunter.  He loves to toy with his catches also, which he brings home regularly.  I’d  hate to think what he’d bring home if he had all of his equipment.

But I had forgotten how much fun it can be to try to get work done on the computer with a cat like Henry around.  I had my laptop, my iPad, my old, damaged phone, and my new iPhone out on the little table while the two phones transferred data with no help from me whatsoever.  Henry tried to be helpful, or possibly not so helpful, but he didn’t seem to cause any issues either.  He is the kitty you can count on to be right in the thick of things, when he isn’t playing hide and seek in the cupboards and drawers, and needing to be extricated.  I don’t see pets in my future, especially not while I’m wandering the county, but I can visit my kids if I feel the need to pet something. 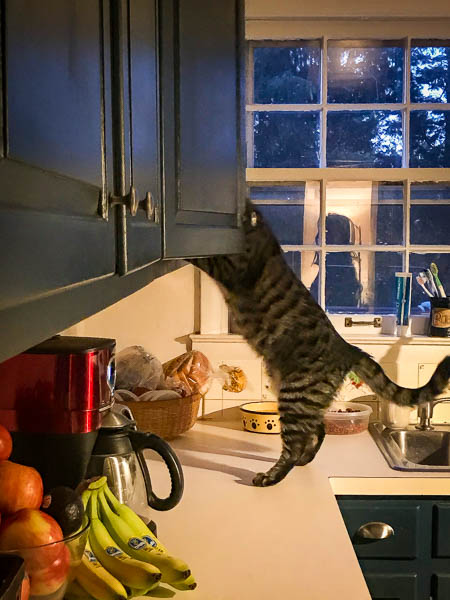 My son’s menagerie includes two dogs, and two bearded dragons.  I drew the line on pets when he was little.  All pets in my house had to be furry, and even though it may have qualified I said no to the ferret also.  He’s making up for that now.