Yes, I had decided that I wanted to visit Skyline Drive again.  It had been a day trip from my home in Maryland, and we did enjoy driving portions of it and taking pictures, but that was a very long time ago.  And we didn’t do the entire drive.  I had forgotten the details, except that we once got a short glimpse of a bear while we drove through.  And, it occurred to me as I drove it on Friday, that I wasn’t the driver on those trips long ago.  No, Charley was my chauffeur, so the day wasn’t as exhausting back then.  Or it was my age.

I started the day in Coventry, RI, and stopped for pictures at The Community Bridge in Frederick MD, which had me approaching Front Royal, VA, the northern access point, about 2 PM.  And that was before I bounced the car and trailer over some RR tracks and caused the camper to become unhitched.  The trailer jack was now embedded in the road, and before I could even get out of the car to see what the heck had happened two very nice drivers were already on the case.  They got the trailer jacked up, they got me hitched up, and I was on my way in no time.  Physically anyhow.  Mentally I was listening to every squeak and groan of the camper and expecting disaster any second.  I started the 100 mile, 30 MPH drive, at 3 PM.  The light was harsh, there was a lot of haze, and the views from the overlooks were repetitious.  My chat with Bob set me back further, and once I left him I mostly glanced at the overlooks and skipped getting out of the car.  But as I drove further I realized that the overlooks on my right, in the west, were becoming interesting.  The sun was getting lower and the clouds looked promising, so I quickly hopped out of the car, took a couple of HDR images, and moved on.  Eventually the sun was low enough that I worried that it would slip out of view before I got to another overlook.  But I was relieved that I did see the sun actually set, and was able to leave the southern point of the park while it was still light.  I found a gas station where I burst through the door and asked the gentleman.”Where am I”?  He replied, loudly, and in his best Southern drawl, “Ma’am, you are in GOD’s country,  Waynesboro, VA.”  For a tiny little town it had the essentials, a Panera where I could plug in the computer and have a bite to eat, and a Walmart where I could join the other campers overnight.  My issue with the trailer hitch had me heading for home after that.  I had hoped to camp and spend several days exploring, but since I couldn’t unhitch the camper there wasn’t a point.  Maybe next time… 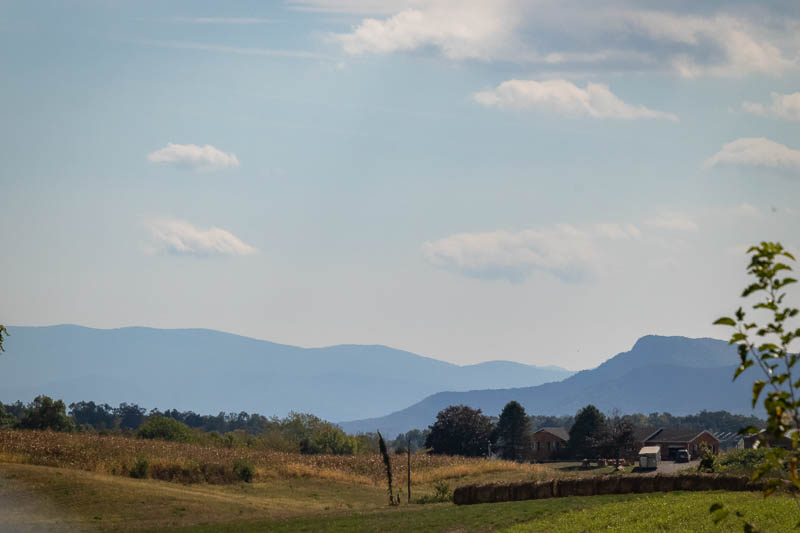 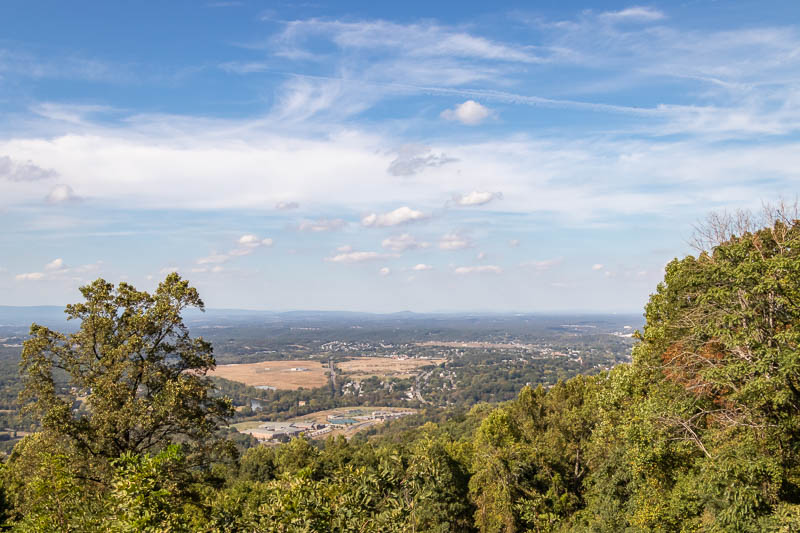 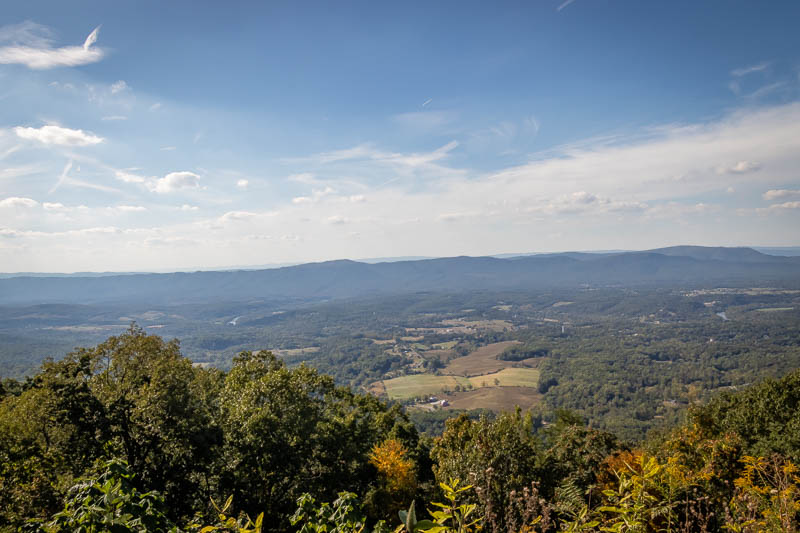 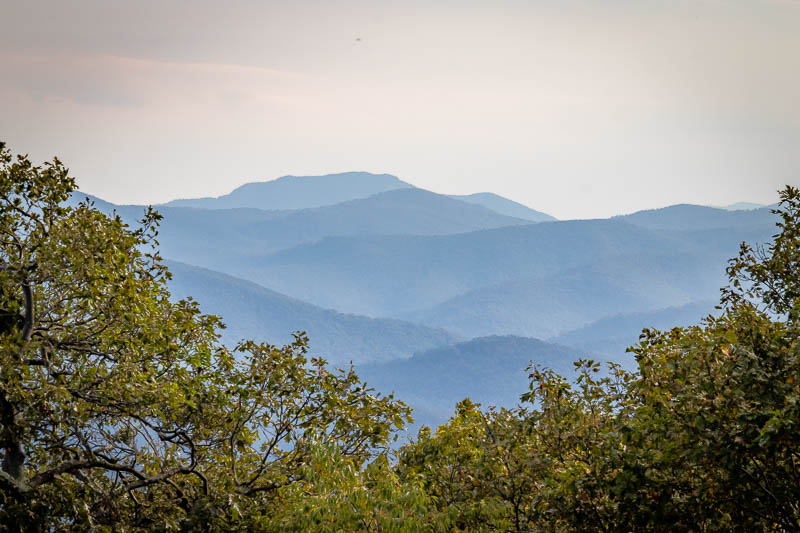 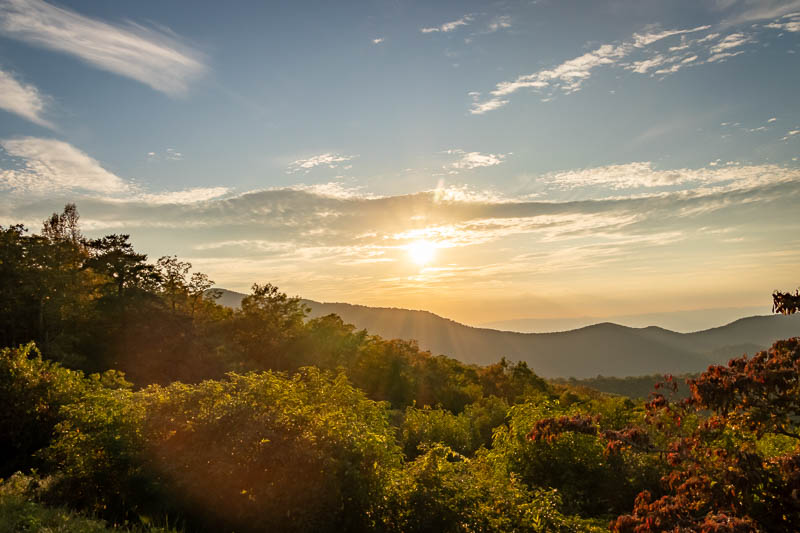 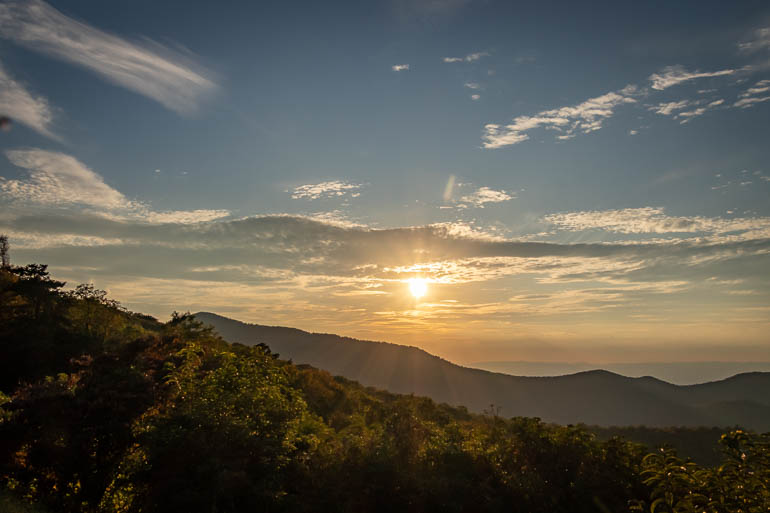 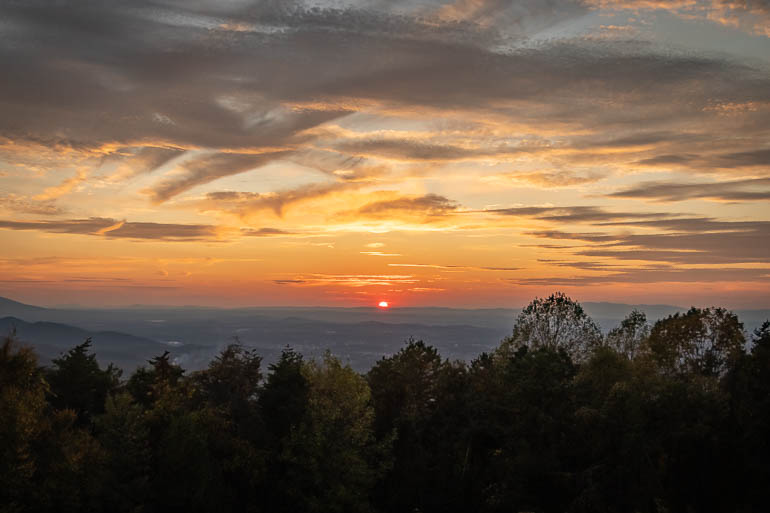 The southern end of the drive is where the deer crossing signs are, and the deer were there, just not crossing.  And a sign that said “high collision area”.  Not a thrill to see when you are tired and hurrying so as not to be in the park on those roads in the dark.  And the last thing I saw was a bear, just off the side of the road, and he scrambled away.  He was a cub, quite small.  I wonder where Mom was???