I headed north to join my friends Betty and Linda for a hike in the Chassahowitzka National Wildlife Refuge yesterday.  It is a vast, 30843 acre, of preserved wilderness area encompassing four of the coastal counties in the area I call home.  They volunteer at the Chinsegut Conservation Center and have become quite knowledgeable about the history of the area.  The point of our hike was to find an area they had been to on a guided hike a while back, wanting to see the area again without a big group of hikers.  That the hike began with us looking for the particular tree that would mark the spot to go off the trail and into the woods didn’t come as a huge surprise to me, I had faith in them that we would in fact find our way back to the cars at the end of the day.

We were in search of the ruins of a thriving community that existed here from the years 1910-1917.  It was built around a logging company, and these are the remains of the actual logging business and mill that worked the area.  In addition to this area there was a town nearby with neighborhoods populated with workers of various nationalities.  They had a small railroad to move the logs to market, plus there were houses, a post office, school, saloon, all the components of a community.  By 1917 all the usable trees in the area had been cut and the people moved on, taking as much of their building material as they could, to be reused as they rebuilt in a new area.  In the 100 years since they left Mother Nature has reasserted herself, with help, and leaving not much to mark this time in history. 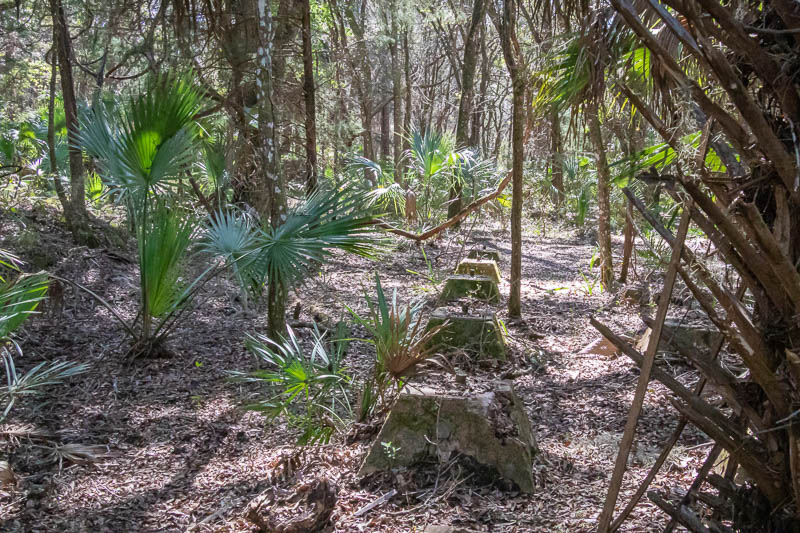 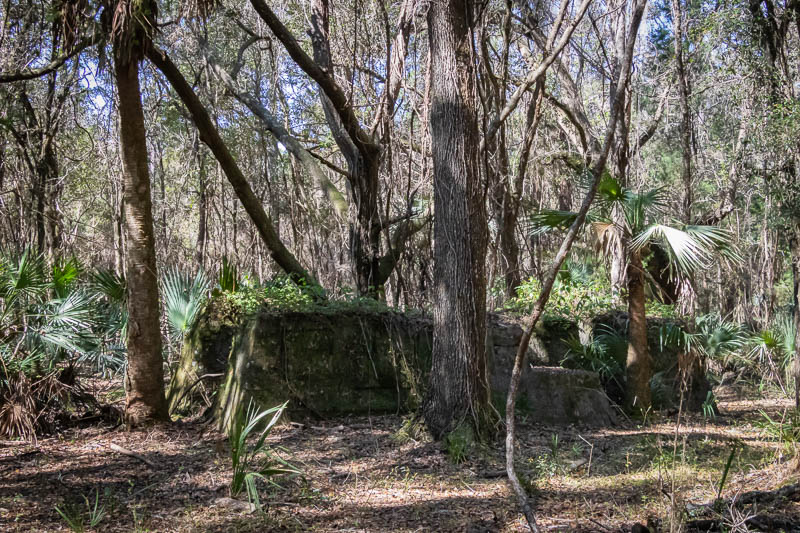 Some of where we hiked yesterday had been underwater when they had been there before.  The area is spring fed and there is water just off the road in a lot of the area.  Water and the creatures who live there, such as an alligator they dubbed Nestor, who they thought was a male until she had 16 babies last year.  As we hiked I had to wonder where she and her babies might be lurking as we took pictures.

I, for one, would not want to be lost on these trails.  Once we got back to the car we did something we don’t usually do, we sat and talked at a picnic table, deciding where to go next.  We were aware of a woman who was waiting for her 84 year old friend and his Jack Russel terrier to return to his car.  She was calling his cell phone, but she suspected that he’d left his phone in the car.  He had been gone quite a while, she said, and it was now 4 PM and with only a couple of hours of daylight left we offered to drive the roads to see if we could find him while she waited by the car in case he came back.  We drove a long way, I was afraid that if he had fallen we may have driven right by him, and we all suspected that surely a man his age wouldn’t have walked that far.  But Linda said that something told her not to turn around, to keep going, because this road was not traveled by many visitors who might come across him to help.  And the story has a happy ending because sure enough, we found him.  He was fine and still walking, but boy was he happy to see us.  He had gotten lost, and the trail he was on would eventually loop back to the parking area, but not for another five or so miles.  Don’t you just love a happy ending.  I do…

His name was Kenny and he said he learned a big lesson from this experience.  Always keep your phone with you.  Good advice.