One thing is for sure, I have plenty of old pictures to play with while I keep my distance.  I had totally forgotten about these ducklings on the lake until I scrolled past them in the computer.  And since I talk about all the wildlife out there, and a variety of ducks out there to boot, it now stands out to me that I only saw these two families of ducks out there.  Ever. 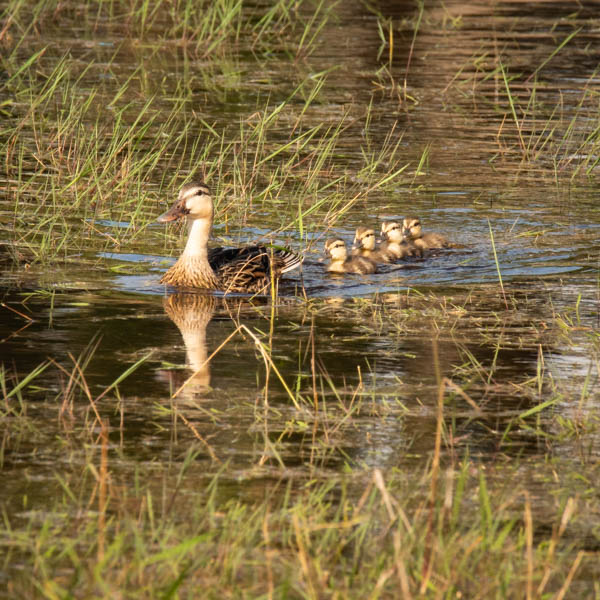 I had to include this picture of Ozzie out there even if the ducklings blend into the weeds in the water.  As I was sitting there taking pictures of the ducklings I realized that Ozzie was laying in the grass not 15 feet from the edge of the water and the momma duck was letting her babies play along the shore without a care in the world.  I had already figured out that the wildlife out there paid no attention to Oz, there simply was no hunting gene in his make-up.  When Zoe was around she loved to run through a flock of birds on the ground, not to catch one, just to make them fly.  It was the labradoodle in her.  I once saw Ozzie snuffle a frog on the patio and then walk away.  He was a live-and-let-live kind of guy.  So I wanted to get a picture of Ozzie with the ducklings so close at the edge of the water, but I had to reposition myself to do it which caused momma to swim a few feet from the edge.  You’ll have to use your imagination to fill in the gaps.

And I came across this picture too, of the pied-grebe face to face with his lunch.  There was a frond of grass that had blown right across the action, leaving a hazy green smudge.  Try as I might with all the new tricks I’ve learned in Lightroom I couldn’t do any better than this to clean that up.  Poor froggie, it just wasn’t his day…