This interest in photography has led me to take a closer-up view of the natural world, and to face the facts that life for the birds and animals that I photograph is a day to day struggle to stay alive.  As opposed to the Disney-like view of how pretty all the creatures out there are, which is about as deeply as I thought about it in the past.  But this rugged Wyoming landscape has given me a new appreciation for what it must have taken for people to come and settle in such a beautiful but harsh climate.  To have had to go out and gather food, or not eat.  To have to build shelters for themselves that would keep them alive through harsher, and longer, winters than I would have imagined.  And to  discover ways to provide services to your neighbors that would allow you make a living.

These are the things that crossed my mind as I visited Menor’s Ferry.  In a non-Covid year there would be displays in the general store, and opportunities to ride the ferry across the river, and a bit more information about life in those days than just taking a self guided tour and trying to use your imagination to fill in the gaps. 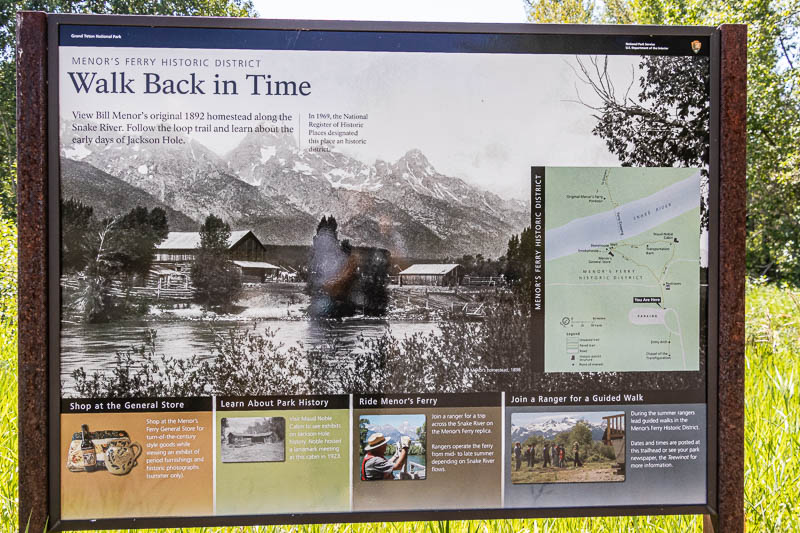 The replica of the ferry itself… 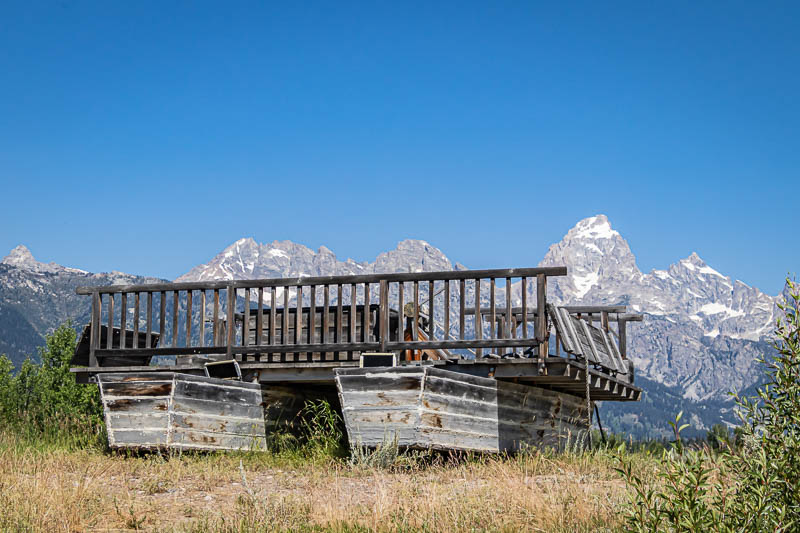 The home in which a meeting took place which led to the eventual founding of The Grand Teton National Park.

And the Chapel of the Transfiguration.  It’s altar window frames the highest mountain peak, but I didn’t get to see it since it’s not open this year. 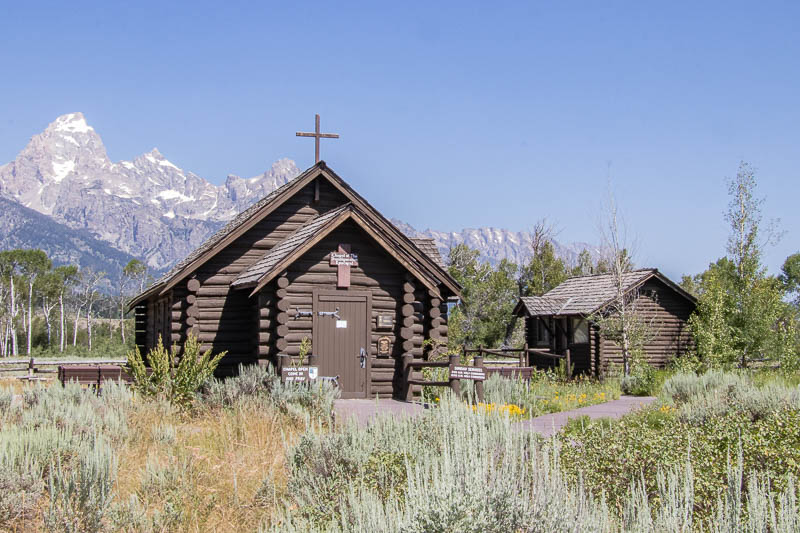 I looked this information up this morning to be sure to be more accurate.

Menor’s Ferry
Menor’s Ferry once belonged to William D. Menor who came to Jackson Hole in 1894, taking up a homestead beside the Snake River. Here he constructed a ferryboat that became a vital crossing for the early settlers of Jackson Hole Valley.

Jackson Hole was isolated by its surrounding mountains and had such a harsh climate that it was one of the last areas of the lower 48 states to be settled. Homesteaders came here, mainly from Idaho, beginning in the late 1880s. Most early settlement in the valley took place in the south, or on a few scattered areas with fertile soil on the east side of the Snake River. Menor was alone on the west side of the Snake for more than ten years.

Rivers are often important transportation corridors. However, the Snake River was a natural barrier that divided the valley. In dry months the river could be forded safely in several locations, but during periods of high water even the most reliable fords were impassable. After 1894, Menor’s Ferry became the main crossing in the central part of Jackson Hole. Residents crossed on the ferry to hunt, gather berries and mushrooms, and cut timber at the foot of the mountains.

Bill Menor built the original ferryboat and cableworks. Today’s ferry and cableworks are replicas. The ferry is a simple platform set on two pontoons. The cable system across the river keeps the ferry from going downstream, while allowing it to move sideways. By turning the pilot wheel, the rope attaching the boat to the cable is tightened and points the pontoons toward the opposite bank. The pressure of the current against the pontoons pushes the ferryboat across the river in the direction the pontoons point. This type of ferry existed in ancient times and was used elsewhere in the United States.

Menor charged 50c for a wagon and team and 25c for a rider and horse. Pedestrians rode free if a wagon was crossing. When the water was too low for the ferry, Menor suspended a platform from the cable and three to four passengers could ride a primitive cablecar across the river. In later years, Menor and his neighbors built a bridge for winter use, dismantling it each spring.

Menor sold out to Maude Noble in 1918. She doubled the fares, hoping to earn a living from the growing number of tourists in the valley. Noble charged $1 for automobiles with local license plates, or $2 for out-of-state plates. In 1927, a steel truss bridge was built just south of the ferry, making it obsolete. Maude Noble sold the property to the Snake River Land Company in 1929.

Bill Menor and his neighbors homesteaded here thinking of the local natural resources as commodities for survival, but many of them grew to treasure the beauty and uniqueness of Jackson Hole. In 35 short years, from Bill Menor’s arrival until the establishment of the original park in 1929, this land passed from homestead to national treasure.