I think it’s the lack of caffeine that has gotten to me.  I was supposed to cut it out a while back but I compromised and went half-caf.  I hardly noticed the difference.  But a couple of weeks ago I went a little brain dead in Walmart and bought Folger’s Black Silk, a huge tub of it.  There was a crowd in the aisle and I saw the price and bought it, forgetting completely about caffeine.  And of course I can’t waste so I used it up, and then went to Publix and virtuously bought decaf, on BOGO of course.  And I’ve hardly been able to get myself out of the house since.  I blame the lack of caffeine, but it might be the heat too.  So this morning I headed out to walk at 6 AM, when it was cool and breezy.  And got to see a pretty sunrise to boot.  At least it’s something…. 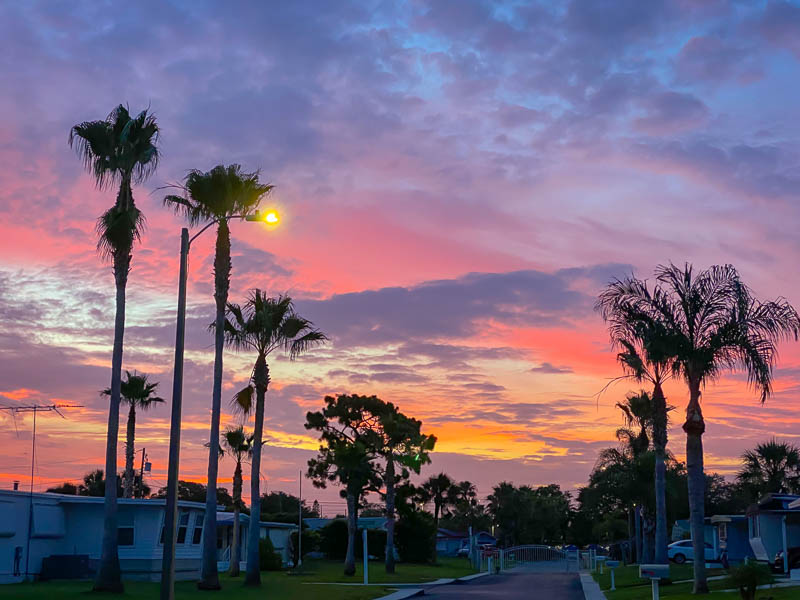 When I was a kid swinging on the monkey bars at the playground I’m sure that I thought I looked just like these ‘swingers’ at the zoo the other day.  Their acrobatics were amazing, they were constantly in motion.  I still remember what it feels like to swing like that, but my swinging days are in the distant past. 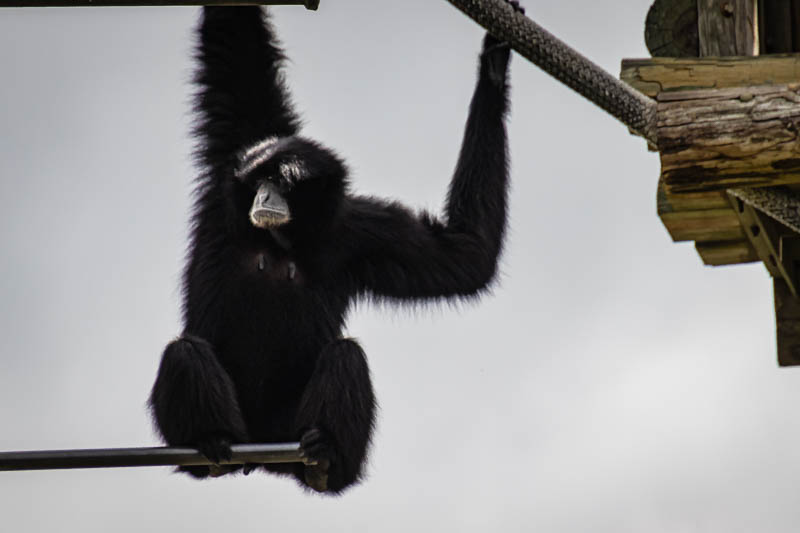 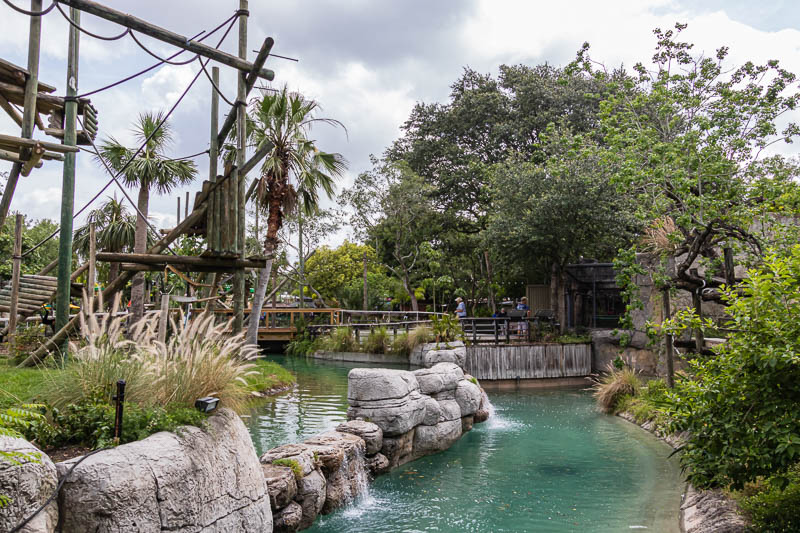 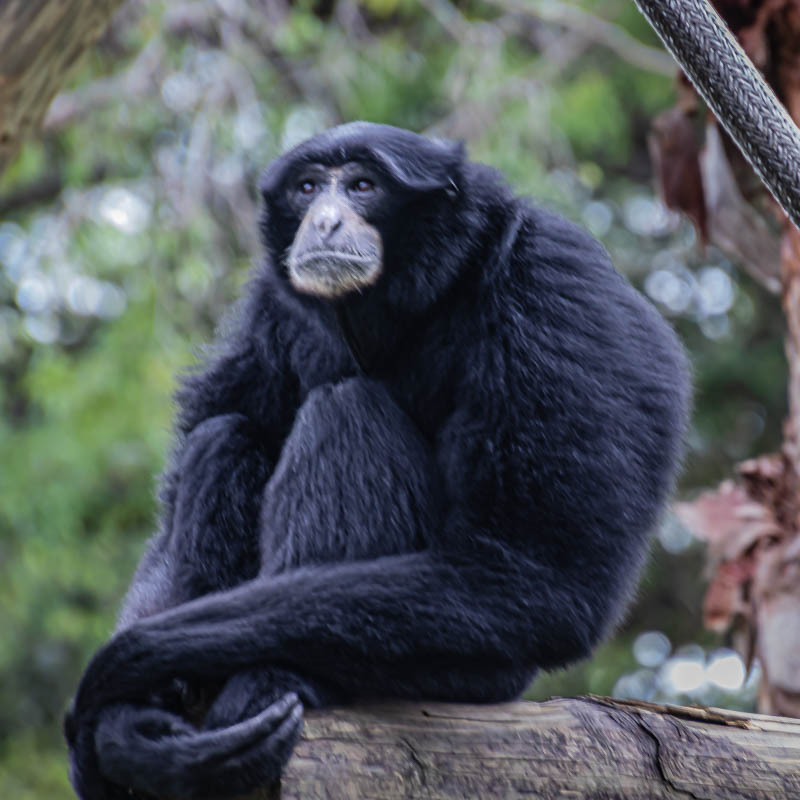 And then they sat and posed, and seemed to be thinking.  Maybe about Herman?  I was attracted to the color in the feature photo and then realized it was a memorial to Herman, “A Gentle Soul and a Friend to Many”.

I’m pretty sure that this safari at Zoo Tampa is the only sort of safari I will ever experience.  I’ve been there before of course, but this was the first time the animals in the Africa section ever caught my eye so much.  Usually the giraffes are more interested in the people feeding them, and I usually take a picture or two of elephants standing around and then I move on.  But not yesterday.  A friend got tickets to a limited admission event for seniors held at the zoo yesterday.  The social distancing mandates weren’t a problem with the 500 ticket limit in place, and despite the heat even the animals seemed to cooperate and we had a great day. 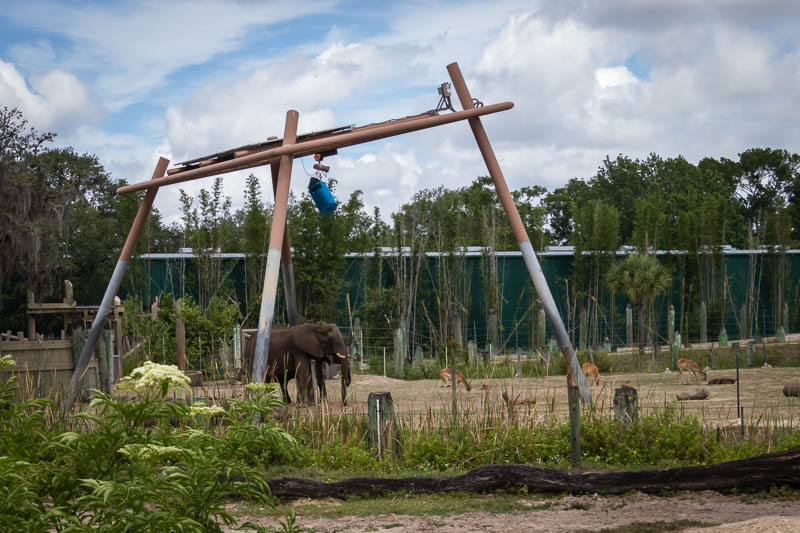 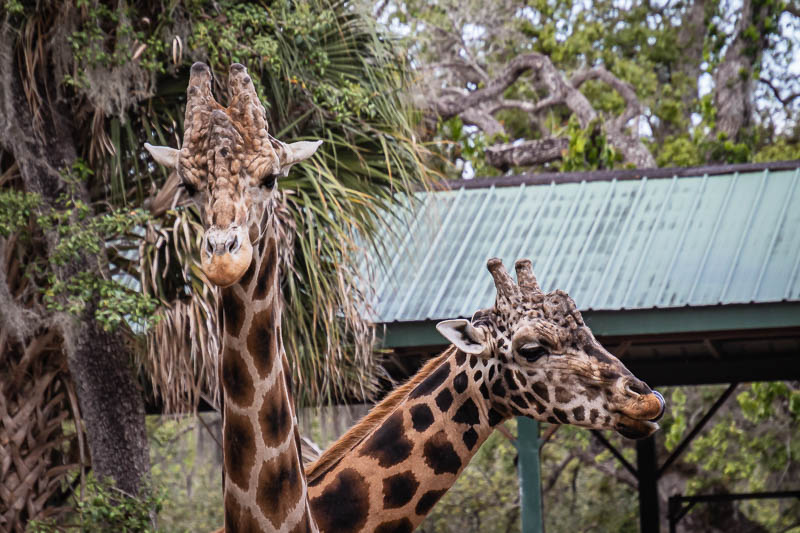 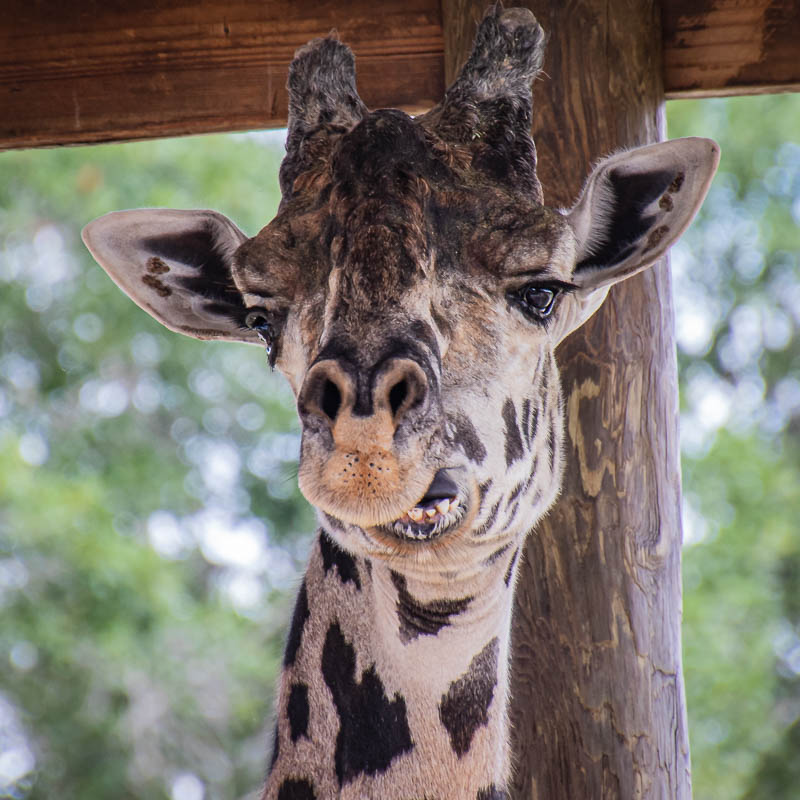 And the  elephants were also doing their part.  Who wouldn’t enjoy seeing a baby elephant, even if you have to take a lot of elephant butt shots to get a photo?

We especially enjoyed it when they moved on to their watering hole.  Seeing the baby elephant frolicking in the water was so fun, even if the adults were making photos a challenge at times.  But perseverance pays off now and then. 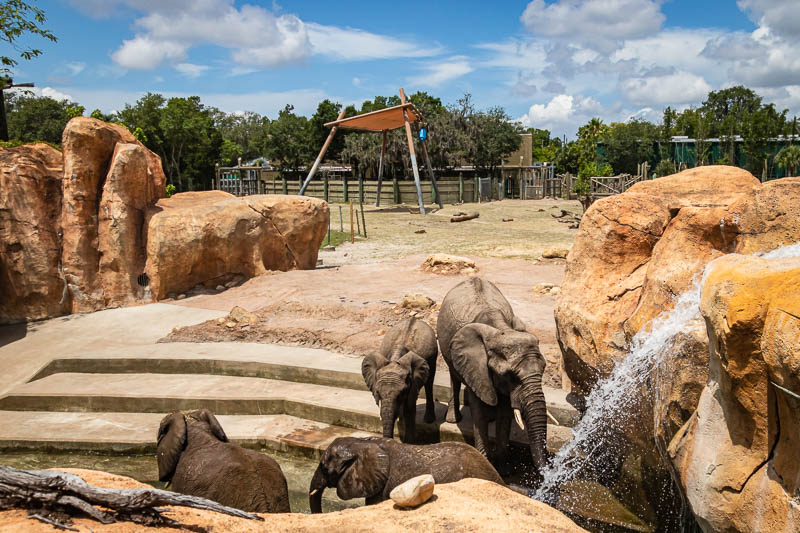 Trust me, we weren’t wishing to join them in the water even with the heat.  Nope, it was a bit aromatic as we watched…

Great Blue Herons seem to be aware of their regal looks and they like to strike a pose on purpose, or maybe they just can’t help it. 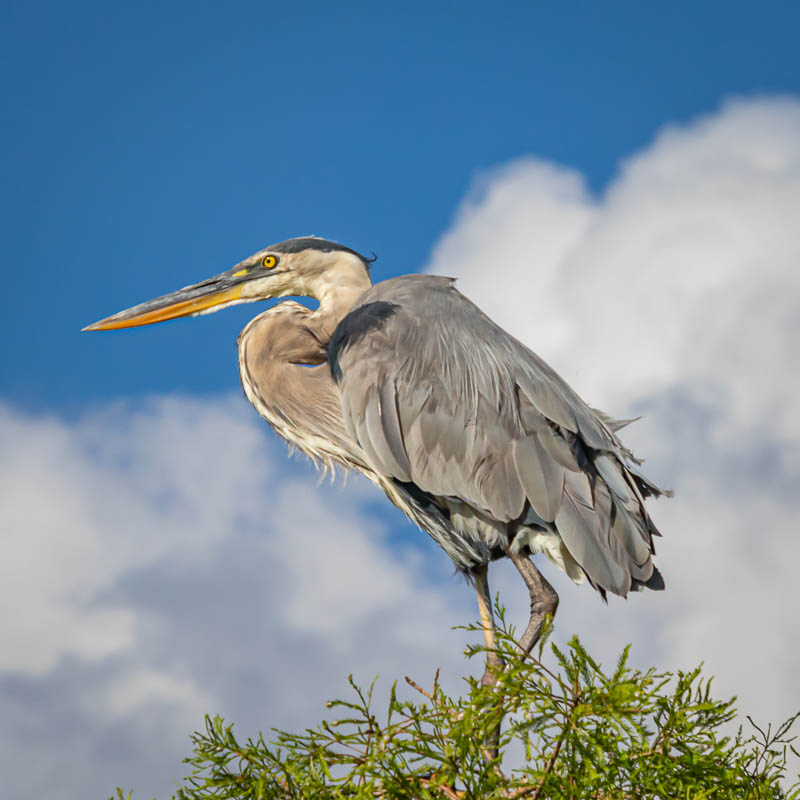 I like it when they look messy and the colors of their feathers show more.  This guy seemed to be drying his feathers as we passed by.  When we got to the end of the trail we did an about face and when we got to him again he was still standing there. 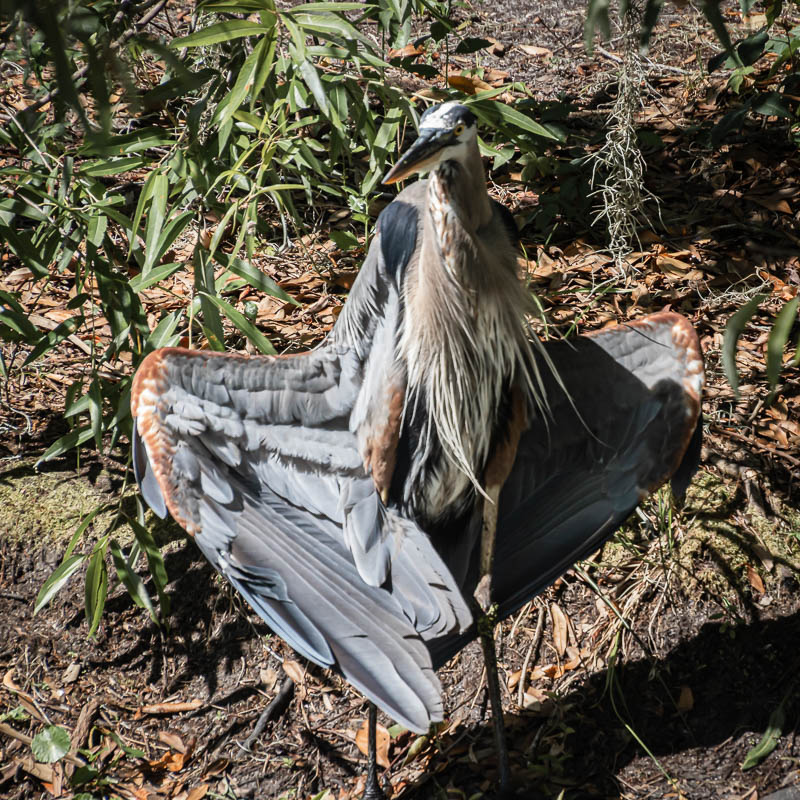 Not long ago a photographer posted pictures of a flock of 100 Roseate Spoonbills landing at one of the ponds here at the B, so of course I hoped they were still hanging around.  They weren’t, but we did see them one at a time, or maybe it was the same one over again.  And when he suddenly took off and flew the three of us all missed the shot.  But the shots we miss are why we go back. 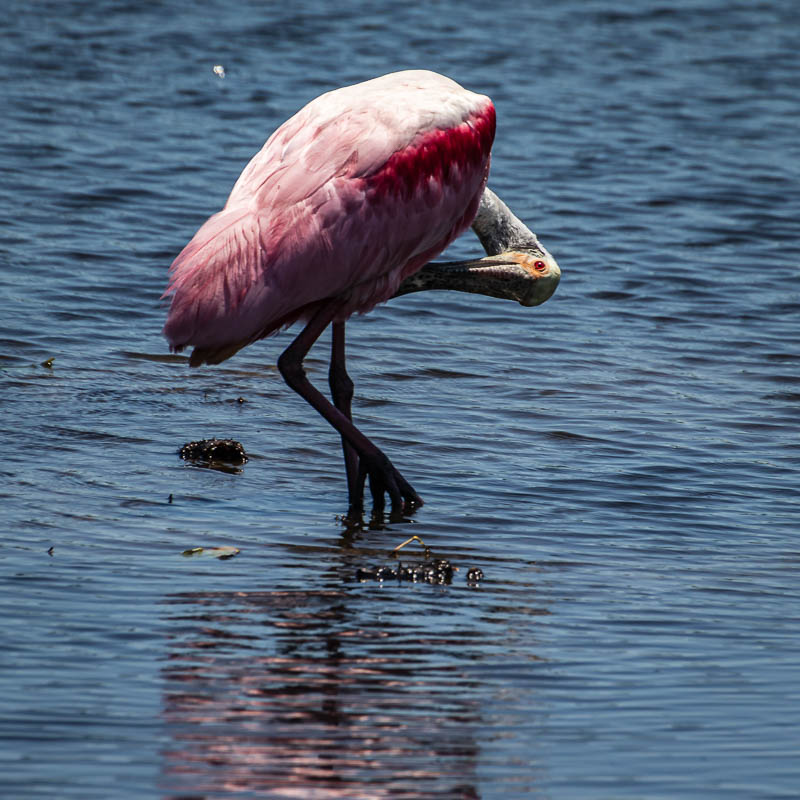 Would you want to take a nap standing one-legged in an alligator infested waterway?  I wouldn’t either, but this Spoonie seemed to think that this was a perfect spot for a siesta.  After hiking at least 6 miles, and in the hot sun at least half of the time, we were ready for a siesta too.

I visited the rookery yesterday and found nest after nest of what appeared to be nearly full grown wood storks, mostly standing at attention.  Waiting for what I wonder, mom to feed them?  I love the expression on the face of the younger one in the feature photo,  I think they are still my favorite babies.   I think this egret mother takes her life in her hands when she shows up to feed her babies.   They tackle her, it doesn’t look pleasant, for mom at least.

The cattle egret babies are growing too.  Without an adult on the nest with them it took me a minute to realize which nest was theirs. 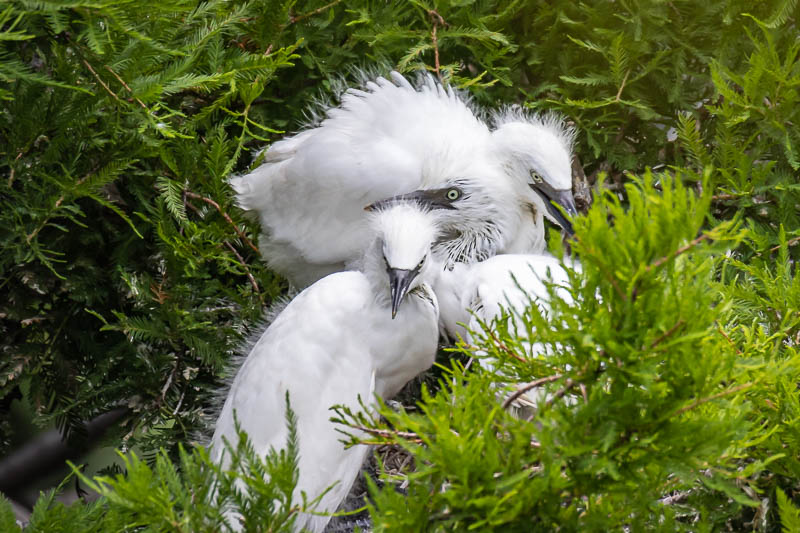 A friend told me that the wood storks have taken over this rookery, it wasn’t always this way.  I lived in the area for 10 years before I ever knew that it was there, and now I have to wonder what happens at the end of the season.  I’ve been headed north by this time the last two years in a row, so I guess I flew the coop before they did.  Do they all just fly off one day?  I’ve stopped out of curiosity when it isn’t breeding season and there wasn’t a single bird around at all.  It would be fun to see all those big babies start flapping their wings and taking off, but so far I haven’t seen any practicing.  I’m just as bad.  I feel like flapping my wings and taking off too, but can’t seem to make a plan.

My old friend says that the secret to life is to never make a plan, then everything is always going according to plan.  I wonder how his life might have changed if he had  had a plan.  And my life looks nothing like I ever thought it might despite all the plans I made for myself over the years.  I feel like I should say something profound right about now, but I haven’t got a clue.  Just letting the days pass… 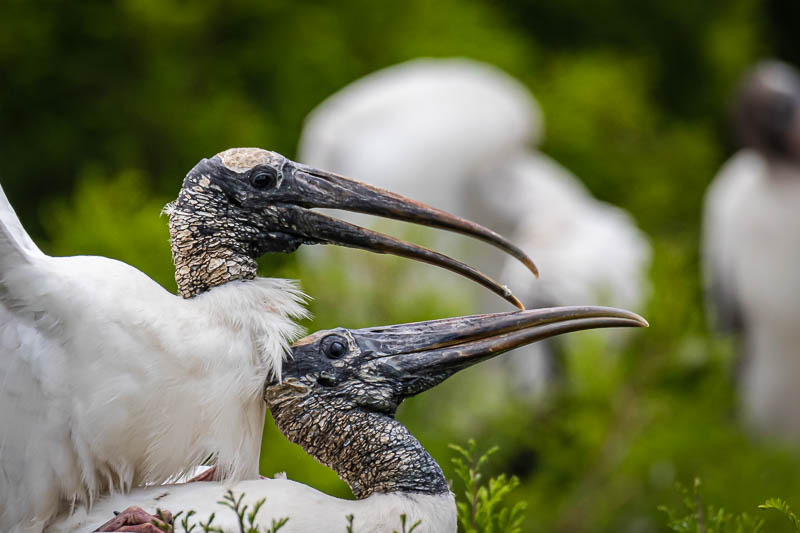 Florida’s beaches have been reopened, and that makes me happy because a quick trip to Green Key Beach for the sunset was easy enough to do.  But I have this nagging feeling of guilt for being ready to get back to normal.  Several of my closest friends are very concerned about a rush to normalcy, and with very good reason.  Boredom on my part doesn’t seem like much of a counterpoint to their worries.  But I went to the beach anyhow, and the closest I came to anyone was this night heron.  I don’t know who was more surprised, him or me. 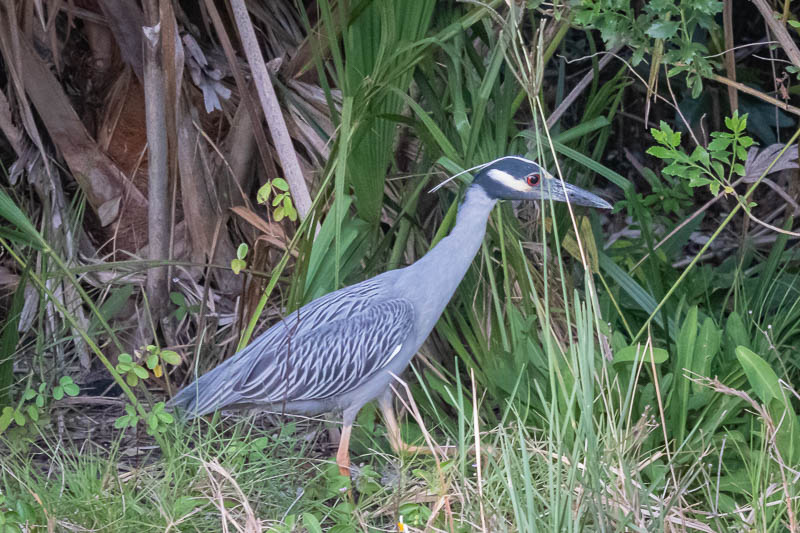 These birds are usually hard to see in the shrubbery, not standing beside you all of a sudden after you went back to the car for bug spray.  I had walked to the farthest end of the beach where it meets shrubbery to get this shot and then retreated for bug spray. 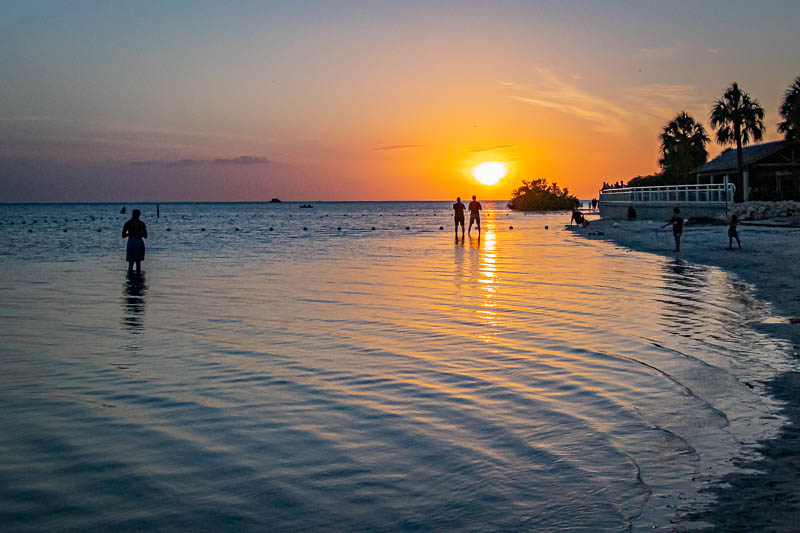 Between high tide and the landscaping that has been done to this beach in the last year positioning yourself for a nice angle on the sunset was a challenge.  The no-see-ums didn’t seem to be phased by my bug spray, and people were clustered closer together to watch the sunset at the other end of the beach, so I headed for home as soon as the sun disappeared.  Somehow the days pass…